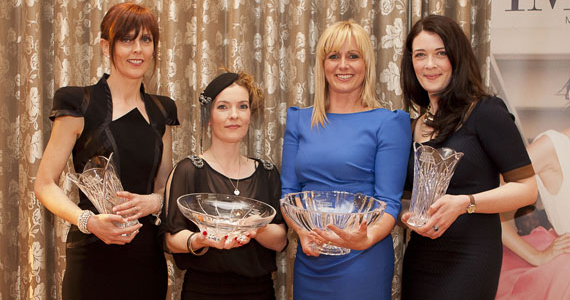 The KFW12 Award Winners were:

Student womenswear designer, Valerie O Shea (Cork) was also given a special accreditation by the judges for her original and imaginative new collection. 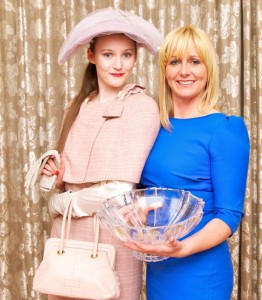 The Awards were judged by Melanie Morris, Editor of IMAGE magazine, Liz Greehy, Editor of top on line fashion website, stylebible.ie and last year’s winner of KFW Fashion Designer of the Year, milliner, Michael Leong. Each of the winners received a specially commissioned Killarney Crystal Trophy. In support of up and coming design talent, the winner of the KFW One to Watch, Laura Jayne Halton, received a Brand Communications Package (worth 2.5k) sponsored by Paul Ruane, Director, Midpoint Creative. Paul was also responsible for the design of all KFW marketing and promotional material this year.

The KFW Awards show exclusively opened with the new collection by top milliner Michael Leong. Models, all from the Kerry based Upfront Model Management agency, wore specially designed, Alexandra McQueen inspired, black corsets created for the show by young designer Orla Doyle.  This dramatic entrance, set the tone for a runway show which included previous KFW winners, new Irish design talents and all 12 of the award finalists. Some of the many highlights on the evening was the exclusive first showing of collections in Kerry by Umit Kutluk and Natalie B. Coleman and the launch of collections by top milliner Carol Kennelly and Kathleen McAuliffe and womenswear designers Karyn Moriarty, Caroline Atelier and House of Delphine. Kerry born, NYC based fashion designer Don O Neill (THEIA) was announced as the recipient of the 2012 KFW Special Merit Award. Minister Jimmy Deenihan, travelled down from Dublin to personally present the Award to Don’s sister, Deirdre Mahony. Other members of Don’s family at the show on the night were his father and mother Don and Min, his Aunt Breda and Deirdre’s daughter Aoife. Two of Don’s creations from his current Theia collection graced the runway thanks to Richard Alan, Grafton Street, Dublin.

Also featured on the night, were top Irish labels from Carraig Donn, Jasmine of Tralee, Hannons of Castleisand and MacBees of Killarney.